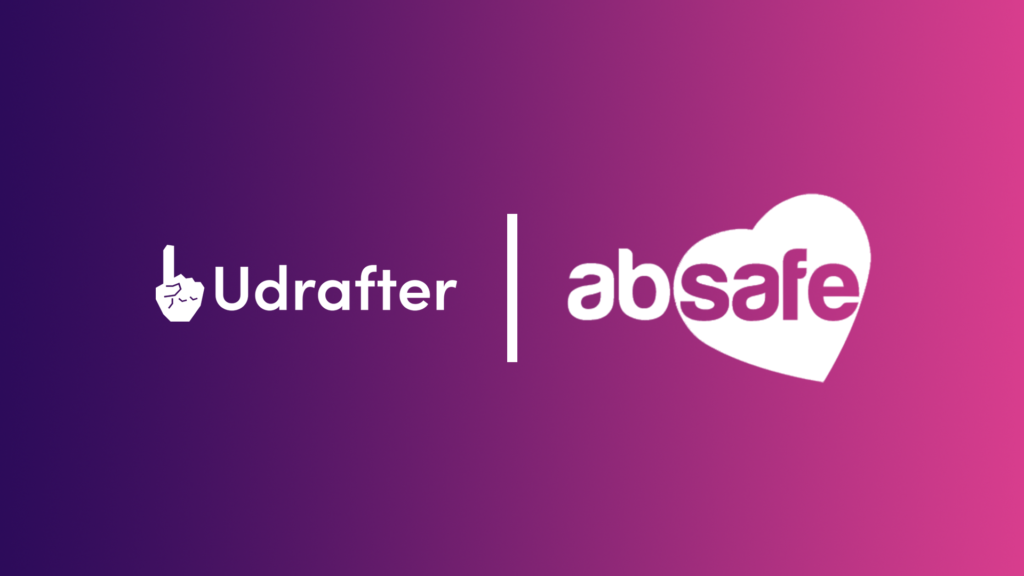 Louise Richardson is the CEO of Absafe, an award-winning charity provide safety and education training for children and young people in Aberdeenshire, Offering a wide range of services from fire and road safety, to courses on safely using the internet and mental well being.

Absafe have now completed two projects with the help of Udrafter interns focusing on social media content production and web development.  Udrafter Co-founder Daryll, caught up with Louise to talk about her experiences with recruitment,  interns and Udrafter

WHAT WAS THE RECRUITMENT WORKFLOW LIKE AT ABSAFE BEFORE DISCOVERING UDRAFTER?

You need an area of expertise that you don’t have in your existing team. So, it was quickly identified that the current team didn’t have any skills with social media or content creation. I knew about yourself [Udrafter], so that’s why we decided to go with Udrafter, because what we needed was a short-term project that were targeted at developing a website, which actually was nonexistent at the time and then we needed somebody to lead the social media campaign.

The gift was we knew it wasn’t in our current set of skills and we knew somewhere that we could go to get that set of skills in a very easy organised way.

WAS THERE ANY WIDER FRUSTRATIONS YOU HAD, BEFORE YOU ENGAGED WITH AN INTERN ON UDRAFTER?

I think with any recruitment, it can always it can be difficult because you have a very specific project that you have in mind. It can be time limited, particularly with charities with limited funding. So, what you don’t want to do is go through a three-month recruitment process and then only have the project for three months and that may not entice or encourage people to apply for it because it’s a very short-term project. So, the frustration would be that it may take you three months to get somebody into the post, but actually you’re funded only lasts for three months, which can happen quite frequently in charities because of funding limitations. So that can be a massive frustration getting the skill set that you need into the organisation.

HAD YOU WORKED WITH INTERNS BEFORE?

I’ve worked with students and interns before in other areas that I’ve worked in and I think what I’m very keen about is young people have a skill set that we sometimes dismiss because we don’t give them opportunities to explore that or develop that in the world of work. So I think that’s why I was really keen to work with Udrafter, because your USP is something that I’m very passionate about in terms of developing the skill set in young people in the local area.

HOW DID YOU NORMALLY GO ABOUT FINDING THOSE INTERNS AND ENGAGING WITH THEM?

I think unfortunately and that’s why I think Udrafter is a really good company, is that the interns usually did it for free and as an employer, you’re grateful for that but as an employee, that’s not a really great place to be. I do think that, if you are going to bring a set of skills that you should be rewarded for that in some way or another. So, I think that was typically how we worked with interns that that wanted to do some work experience, typically they did it for free, which is why you exist, isn’t it? Because what we want to do is say, you know, what you’ve got is valuable, so we’d like to make sure that you’re rewarded for that adequately.

WHAT RESULTS DID YOU ACHIEVE AND HOW HAS THIS IMPROVED YOUR BUSINESS?

I think it’s definitely taken a weight off my shoulders. Initially I worked with Edwina [Udrafter Intern], who developed a website. Our website really hadn’t been touched for a couple of years and it was on an old operating system. She came in, branded it, colour coded it and spent a lot of time on it. We needed to do that because we needed to have a starting point for people to visit if we were going to increase our social media presence. We then worked with Josie [Udrafter Intern] who developed a social media strategy and then looked at all our social platforms and developed all those social sites. From there we have done a bit of analytical work and worked out what works and developed new KPIs that we can move forward with, specific targets for other social system times we post on Instagram because we know that works and then maybe not Facebook and we’ve set up a tiktok account.

Well, when I say me, it was Josie. she drove that forward and it has been a real joy to have her on board.

WHAT HAS WORKING WITH AN INTERN GIVEN BACK TO YOU?

It’s allowed me not to worry about it [the project] . It’s allowed me to gather information and send it to a point [Josie] if I’ve got some information about health and safety or some information it may have come from the RLNI, I will send it straight to Josie, Josie creates a post, Josie puts it out. So it has freed up my time, but also more importantly allows us to get specific messages out so hopefully we can influence people and maybe they’ll think twice about doing certain behaviors that may cause them some risk.

HOW WOULD NOT HIRING AN INTERN IMPACTED YOUR WORK AND PROJECT?

I think I would never have been able to do what Josie did because I don’t have that skill set and when I look at employing people for the charity they have to be people that don’t have the skills that I have because there’s no point. Myself and Josie have a really good working relationship and we get along really well. We’ve never met in person, we’ve only met online….It sounds like a date app, doesn’t it?

But I really have got a lot of time for her, for her skill set. It’s freed up that part of the business that I wasn’t able to do, I probably could have done it but it would have taken a lot of time and energy and probably not to the same standard. She has that kind of perspective on social media platforms that I don’t have. And I’ll be honest, I don’t particularly want to have. So because she has that skill set, I don’t need to have that and I think that’s a relief and a joy, actually.

WHY UDRAFTER AND NOT ANOTHER THIRD-PARTY SERVICE THAT YOU TRADITIONALLY THINK OF WHEN YOU THINK OF RECRUITMENT?

I really like you [Daryll] and Luke, I like your ethos, I like the way that you deliver a service. I like the personableness… (I don’t even know that’s a word) of your service. I think you’ve set up the company with the intentions of providing an opportunity for young people in Scotland and every time I’ve had an idea, I usually think, can Udrafter help me with this? So, it’s an easy service, It’s accessible and it’s personal so I think it ticks all the boxes for myself as a CEO and because I work for a charity, it kind of marries with the core values that we have at Absafe.

HOW DID YOU FIRST HEAR ABOUT US AND WHAT SORT OF PIQUED YOUR INTEREST?

We were involved in another project that we tried to get off the ground with Udrafter but it just didn’t work out because we needed another skill set and I think the project was too big at that point for an internship type role. So that’s how I was introduced to Udrafter. So even though that project didn’t work out and there was no fault of the students or anybody else, it’s just the project was just too much that we needed a whole printing company in the end to deliver what we needed but it still gave the students an opportunity to come up with ideas and they were great, but they just weren’t going to work with what we needed. So that’s how I got involved or heard about Udrafter in the beginning.

HOW LIKELY ARE YOU TO RECOMMEND US AND WHY SHOULD SOMEONE MAYBE LISTENING TO THIS TAKE ACTION RIGHT NOW?

So I recommend you a lot and I think if you are unsure that something may fly in terms of your business plan or your strategy, I think Udrafter is a good toe in the water for that. If you want to try an idea but you don’t want to commit to a full time position, I think Udrafter is a really good way of doing that because you can say, right, we’ll try it for three months and because you do all the kind of HR payment stuff, it’s really easy. There’s one payment that comes out. You [Udrafter] sort all that out, so that takes away that pressure of recruitment and payments, pensions and all those kind of things.

It’s a really easy way of introducing an idea into your company that maybe you don’t want to commit to fully because you don’t know if it’s going to work or if it’s going to fit in or maybe things will change in three months. If it does work and that person works for you and you develop a relationship, then you can make that a full-time job. So I think in a way, it’s a good way of dipping your toe in into a new idea without committing fully. It’s a really good way of providing opportunities for people, but also getting their expertise and sharing your expertise with them. And hopefully your ideas will work and if not, then you can you can still move forward in a different direction.