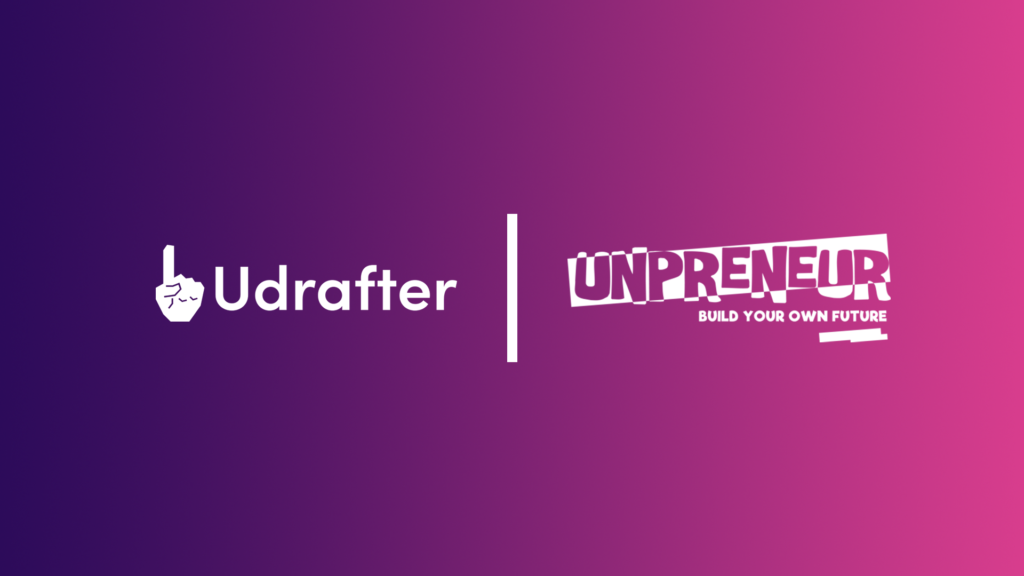 “So it’s not just a time saving, a time return oninvestment, it’s actually a skill set. Like she would be able to offer a better-finishedproduct, a better-quality product. And she was working with us initially justwith the YouTube stuff, the project with 21 steps. Since then, as I mentioned,she’s now doing some of the video editing for social media.”

COULD YOU TELL ME A LITTLE ABOUT UNPRENEUR AND WHAT YOU DO?

Unpreneur is all about helping the next generation of global change-makers make real impact. Whether they are starting their own business or impact when they go and get a job for someone else too, so we just want to help students who graduate make a positive impact in the world and we do that through online training, live events, and other training activities with students and graduates directly, but also through universities and colleges across the UK and beyond.

WHAT KIND OF PROBLEMS WERE YOU FACING BEFORE COMING TO UDRAFTER?

So we have really increased the number of customers, number of universities and colleges we’re working with, and we just needed some way of me, as a business owner, doing less of the stuff that I shouldn’t be doing. We can get caught up in the details, the fun stuff, which is distracting us from the big picture. So whilst it’s lovely to sit as a business owner and do Instagram adverts or creative stuff, that doesn’t necessarily drive the business forward, as much fun as I find that. To grow the business would be to remove me from doing that and find someone else to do that, who’s actually better than me, and that’s where Udrafter came in.

HAVE YOU USED INTERNS BEFORE AND WHY DID YOU THINK YOU NEEDED AN INTERN SPECIFICALLY?

Unpreneur is all about helping students and graduates, So it makes sense that we want to have them close to us. We want to work with them internally as well so we can get into the psyche and the mindset. So over the years, we have worked with lots of students and graduates and to be honest, it has been quite hit or miss in terms of the actual process, in particular. Finding people, people not turning to interviews or staying for a week and then leaving again. So it’s quite time-consuming to go through the whole process from identify what you actually need, drawing it all up, writing it all down, going through applications, shortlisting, having interviews. We’ve been having second interviews, then starting and then it just not working out. So it’s a lot of time, that whole process and energy that again is not spent doing other things that a business owner should be doing for the business.

WHAT DO YOU LOOK FOR WHEN YOU’RE HIRING? IS IT PURELY SKILLS BASED OR ARE YOU LOOKING FOR A CULTURE FIT?

It’s got to be culture. I really look for energy. The person that we ended up hiring for the role on Udrafter, we put it up on the Monday, initially we were a just looking for someone to do the YouTube graphics. For our weekly YouTube show called Student Enterprise TV. Free Plug. Which until very recently I was doing all of the editing, the filming and all the bit and pieces like uploading that to YouTube, getting the cover up for YouTube. It’s actually 21 tasks in that whole process, So finally, we were able to start delegating some of the work to some people and I thought, “I’ve heard of Udrafter from someone.” Another business owner that I knew. And I thought, “We’ll give it a shot. We’ll experiment with it, the platform and the person.”So we put the job advert on the Monday for this graphic designer for our YouTube channel. Just to test the platform. The very next day, the Tuesday, we had four applications immediately and there was one that really jumped out because they’d really done their homework on our business and it really felt like they were really invested their time to know us and have watched some of your YouTube videos, read the blogs and to us, it was more than just a skills person because all four on paper had similar qualifications, similar sort of work experience and skills, that the person we’re hiring she really took the time to get to know us. So, yeah, massively culture is the most important thing for sure.

WHAT WAS THE RETURN ON YOUR INVESTMENT INTO A UDRAFTER INTERN?

Let’s just take the process of us doing a weekly YouTube show. There are 21 discrete tasks in that which is roughly day or day and a half every single week, we’re committed to doing that YouTube show. So having someone like Jeanne  in to help with that really just freed up my time but more than that, she’s a lot better than I was. So it’s not just a time saving, a time return on investment, it’s actually a skill set. Like she would be able to offer a better-finished product, a better-quality product. And she was working with us initially just with the YouTube stuff, the project with 21 steps. Since then, as I mentioned, she’s now doing some of the video editing for social media. So initially it was just, creating YouTube art. She really smashed that. She then progressed into making snippets for social media and she was great at that too. And now, in a few weeks’ time we’re running an event, and Jeanne’s helped us with that as well.

She’s been a huge return on investment in terms of it’s not just a timesaving, it’s actually somebody who’s a real, you know, potentially a core member of the team. We do regard her that. We have a team meeting once a month. She even comes to that. We have a “disruption squad” is what we call it. All those people that work with, and Jeanne’s a core part of that. So we’ve gone from, “Let’s just try this.” To, “Actually we’re looking actually to taking on Jeanne  directly as a sort of more permanent job with us.” Which is awesome.

WHY UDRAFTER OR OTHER METHODS OF RECRUITMENT?

If I’m being absolutely truthful, it was the purpose, it was the mission you guys have. I think it’s sorely been needed for a long time, Udrafter, in the sense of equity for both sides to that. So getting rid of unpaid internships for students and graduates, whilst at the exact same time when start-ups, small businesses can’t quite afford a full-time person, they can get to try before they buy, as we did. And both parties, it’s fantastic value for both of them. No one loses in that, everyone wins. I think it’s a great platform. So when I first heard of Udrafter, I thought, “Well, let’s just give it a go.

WHAT WOULD YOU SAY DESCRIBES YOUR EXPERIENCE WORKING WITH UDRAFTER? AND WHAT DO YOU THINK YOU GOT THE MOST VALUE OUT OF IT?

There are so many benefits to Udrafter. So, putting an offer up on a Monday, getting four applications the next day and interviewing them on the Thursday, and starting with Jeanne the following week and then not just starting with her, but actually six months later offering her a permanent role, and she’s a core member of our team now. It’s like how do you even begin to look at the value there? it’s also a really important mission that you guys do and I think we should be supporting that. What I love most is, is everyone wins. Recruiting gets a bad name being a cutthroat industry as always someone has to lose in that situation. Whereas with Udrafter everyone wins. You know, the graduate, the student, and the business hiring. So I think what you’re doing is great.

HOW LIKELY WOULD YOU BE TO RECOMMEND US AND WHY SHOULD SOMEONE WHO COULD BE LISTENING TO THIS RIGHT NOW?

If you asked me out of ten, I’d say a million and one is my score out of ten. If you’re a student, it’s a great way of getting experience. So many employers, as we all know, say, “Great, you’ve all got degrees, but where is your experience?” So the fact that it gives you experience, but on top of that, it’s paid experience. So if you’re student graduate, you’re mad not to join up to it. You get paid and get more experience, which would lead to starting your own business potentially. It’s a first toe in the water for that. Or it’s a gateway to getting a job with that experience.

As a business. It’s so flexible because with Jeanne  for example, there are times we have lots of work for her other times we don’t so we can be flexible too. Equally we know that she’s got exams, assignments, so we can be flexible with her too through the platform. Overall it just de-risks it all for everyone, It makes it easy to communicate through the platform. Plus, it takes away the admin in terms of the intern puts in their hours, as a business owner, you approve it and that’s it done. So I just hope that anyone watching this sees the value in it. It just makes the whole process painless. And it’s really valuable as well for the business owner and the student graduate.

‍Discover how Udrafter can help you fill skills gaps, scale your team and continue to grow your business.